Goth Family Member, Feather Phill, a New Hampshire native, was killed May 27, 2007 at a Colorado Springs Intersection when his motorcycle was struck by another vehicle. Phill was a civil engineering student at George Washington University. He was in Colorado getting ready to head to Liberia to do some engineering work and to preach the gospel of Jesus Christ.

I had to laugh when Phill visited our home on the way to Colorado. He arrived around midnight dressed in his black motor cycle gear with a feather in his helmet. As he jumped off his bike to give Mike and I a hug, he complained about having a tired bum from his long journey. Phil always had a way with words. Always a keen wit with a twinkle in his eye. I hadn’t seen him in a little over a year since his last visit. He appeared much taller. He had a new hair on the chin thing going on. It was long and split down the middle. My first thought was “we need to braid that thing” and my second thought was “The poor dear must have gotten caught in the motorcycle handlebars and had some ripped right out of there.” Of course, I didn’t mention it and was thinking to myself, “We should pierce something while you are here.” After a meal prepared by Mike (he is a better cook and Phil was a guest), Mike went to bed and Phil and I had “Goth Talk Time” until we both we so tired that we were slap happy.
Phil got up the next morning around 11:30 and we headed off to breakfast at Bob Evans. Phil wanted to try out a new restaurant that he had never been to before that had “country cooking.” We received excellent service, so much so that I thought that the waitress was going to sit in Phil’s lap. As I looked around the room, Phil’s portions also seemed much larger than everyone else’s. I could see that some of the “good ole boys” were staring. Hadn’t they seen two Goths eating breakfast before. Perhaps it was Phil’s northern accent that intrigues them. I was amazed that Phil could eat country sausage gravy and not get a speck on his beard or clothes, while I was covered in crumbs from eating plain biscuits.
Back at our home, Phil planned to leave right away, but you know how that goes when two Goths get together for some more conversation. Phil packed like a pro and I could tell that he was a great engineer. I had never seen someone get so much stuff in such a little space on the back of a motorcycle. He had everything from clothes to his laptop. After hugging me with a bear hug, I kissed his cheek , told him that I love him and he was off at about three thirty. He waved his hand and told me that he would see me in August on the way home to New Hampshire and that he would be able to stay longer then. I told him to ship the bike and take a train so that his bum would not be so tired.
On the serious side, please keep Phil’s family in your prayers. We had some long talks about his family and he was very concerned for them. He loved them dearly and was so happy that his father was able to visit him once a month in Washington while he was there on business. Especially, keep his sister in your prayers. Keeping them all in our prayers is one way that we can, as a Christian Goth family, honor our beloved Phil.
To Phil: You will be missed, but I know that you are in Heaven with our Lord. I can’t help but wonder if your long hair is longer than Jesus’ hair or if you are going to be my next door neighbor when I get there. I have a feeling that you are the engineer for my chocolate mansion and if you would please make sure that the swimming pool is filled with Hershey syrup, it would be greatly appreciated. I love you as if you were my own son and I am so proud of everything that you have accomplished. You are the apple of God’s eye. 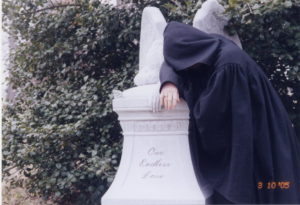